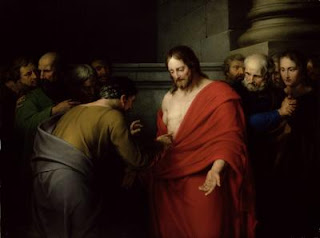 Vigil of St Thomas, Apostle​
Like nearly all the Feasts of the Apostles, that of St Thomas is preceded by a vigil which will enable our souls to prepare for it in a holy manner. The Gospel recalls the vocation of this great Apostle who had the happiness of hearing continually the word of Christ and enjoying His intimacy. "I have called you friends because I have made known to you all that I have heard from my Father." "God," adds the Epistle, "has chosen him from among all men. He has given him His commandments, the law of life and of instruction."

Wherefore the Offertory declares that he had been chosen by Jesus to be one of the twelve princes who would govern His Church: "the Lord has crowned him with glory and honour and has given him authority over the works of His hands."

"The Lord," the Epistle also says, "has given him his share of inheritance among the twelve tribes." The country of the Parthians and Persians was allotted to St Thomas when the Apostles divided the world among themselves. Let us prepare for tomorrow's solemnity in union with the Holy Church.