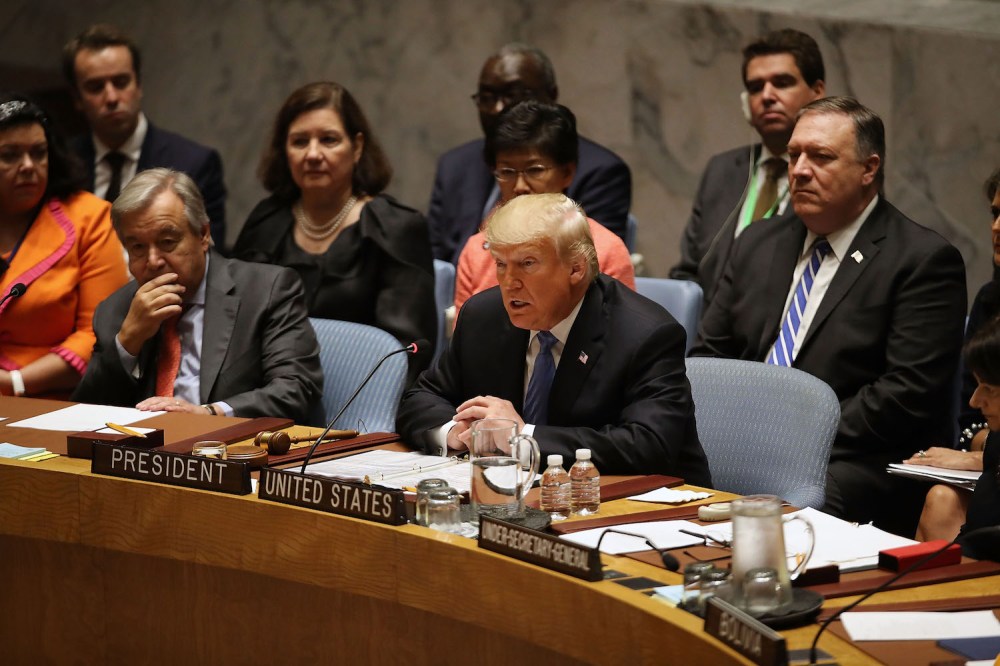 How a U.N. Bid to Prevent Sexual Violence Turned Into a Spat Over Abortion

In an internal document, Trump officials threatened to reject an anti-rape measure over language on sexual and reproductive health.

How a U.N. Bid to Prevent Sexual Violence Turned Into a Spat Over Abortion

In an internal document, Trump officials threatened to reject an anti-rape measure over language on sexual and reproductive health.
p administration pressured Germany into watering down a United Nations resolution aimed at preventing rape in conflict situations, forcing it to remove language on sexual and reproductive health that key Trump administration officials say normalizes sexual activity and condones abortion, according to U.N.-based diplomats and an internal State Department cable reviewed byForeign Policy.

The United States was set to veto the resolution, underscoring the growing rift between Washington and its European allies and the increasing U.S. isolation in multilateral institutions under President Donald Trump. But Germany relented and stripped the resolution of the language to secure the U.S. vote. It passed on Tuesday afternoon with 13 votes in favor. Two countries, Russia and China, abstained.

Trump administration officials say the term “sexual and reproductive health” refers to abortion. But other governments and advocacy groups dispute this view.

In behind-the-scenes negotiations in the run-up to a vote expected on Tuesday, other key elements of the U.N. resolution were removed, including establishing a U.N. monitoring body to report atrocities. The United States continued opposing the resolution over its use of the phrase “sexual and reproductive health,” according to the confidential cable, even without the mechanism.

A U.S. veto would have dealt a blow to Germany’s signature initiative during its rotating term on the Security Council presidency this month. The resolution was supported by a diverse group, including the German foreign minister, the Nobel Peace Laureates Nadia Murad and Denis Mukwege, and the human rights lawyer Amal Clooney.

“There is simply no excuse for continuing to fail those who have already been victimized—as well as those who continue to be at risk of—devastating levels of sexual violence in conflict,” said Mukwege and Murad in a new statement. Both spoke at Tuesday’s meeting of the U.N. Security Council.

The internal State Department cable, sent by Secretary of State Mike Pompeo’s office to the U.S. Embassy in Berlin and U.S. Mission to the U.N. on Tuesday morning, made clear how the German push has angered the Trump administration. The cable told U.S. diplomats to notify the German government of the U.S. intent to vote no on its U.N. Security Council Resolution on Sexual Violence in Conflict if it didn’t change language to address U.S. concerns

The cable criticizes Germany for conducting a “rushed process of negotiations characterized by artificial, abbreviated timelines that failed to permit member states, the United States included, to represent national positions or debate the complex issues related to them.”

PassBlue, an independent women-led journalism site covering the U.N., and theGuardian were first to report the U.S. push to veto the measure. The internal State Department cable has not been previously reported.

The cable says that Germany’s draft text, before it was changed hours later, crossed U.S. red lines: The United States “has consistently and clearly communicated red lines since the beginning of negotiations on Germany’s draft [Security Council resolution], which include: budget implications related to a new mechanism; references to the International Criminal Court (ICC); and references to sexual and reproductive health services.”