Three Priests Who Need our Prayers 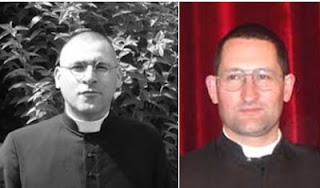 The Sapinière thanks to all the faithful, especially priests who have expressed their support, encouragement and even material aid the three priests sanctioned, to the point that the Sapinière just received the support of a prie

In both cases, the chosen route is a route excruciating painful. They entrust to your prayers so that the truth can shine. Everything passes, only God is, only God is enough. Father Matthieu Salenava (extreme right)

If I am not mistaken, Fr. Matthieu Salenava is the priest who wrote to +Fellay and asked for forgiveness and hence, left alone.
Fr. Oliver Rioult choose to leave the XSPX and
So it was Fr. Nicolas Pinaud who was unjustly punished by Menzingen Kangaroo Court.
But all the same, we must prayer for them, especially for Fr. Salenava to make his stand for the truth.