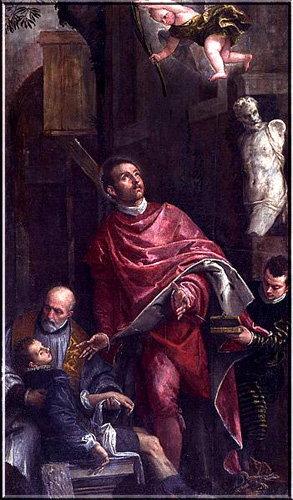 St. Pantaleon, Physician and Martyr
from Mary, Help of Christians, 1908​

Pantaleon was physician to Emperor Maximin and a Christian, but he fell through a temptation which is sometimes more dangerous than the most severe trials by the fiercest torments. This temptation was the bad example of the impious, idolatrous courtiers with whom the young physician associated. He was seduced by them and abandoned the Faith. But the grace of God called him, and he obeyed.

Hermolaus, a zealous priest, by prudent exhortation awakened Pantaleon's conscience to a sense of his guilt, and brought him back into the fold of the Church. Henceforth he devoted himself ardently to the advancement of the spiritual and temporal welfare of his fellow-citizens. First of all he sought to convert his father, who was still a heathen, and had the consolation to see him die a Christian. He divided the ample fortune which he inherited amongst the poor and the sick. As a physician, he was intent on healing his patients both by physical and by spiritual means. Christians he confirmed in the practice and confession of the Faith, and the heathens he sought to convert. Many suffering from incurable diseases were restored to health by his prayer and the invocation of the holy name of Jesus. His presence was everywhere fraught with blessings and consolation.

St. Pantaleon yearned to prove his fidelity to the Faith by shedding his blood for it, and the opportunity came to him when his heathen associates in the healing art denounced him to the emperor as a zealous propagator of Christianity. He was brought up before the emperor's tribunal and ordered to sacrifice to the idols. He replied: "The God whom I adore is Jesus Christ. He created heaven and earth, He raised the dead to life, made the blind see and healed the sick, all through the power of His word. Your idols are dead, they cannot do anything. Order a sick person to be brought here, one declared incurable. Your priests shall invoke their idols for him and I shall call on the only true God, and we shall see who is able to help him. "The proposal was accepted. A man sick with the palsy was brought, who could neither walk nor stand without help. The heathen priests prayed for him, but in vain. Then Pantaleon prayed, took the sick man by the hand, and said: "In the name of Jesus, the Son of God, I command thee to rise and be well. " And the palsied man rose, restored to perfect health.

By this miracle a great number of those present were converted. But the emperor and the idolatrous priests were all the more enraged. Maximin now attempted to gain Pantaleon by blandishments and promises to deny the Faith, but without success. Then he had recourse to threats, and as they too availed nothing, he proceeded to have them put into execution. The brave confessor of the Faith was tortured in every conceivable manner. Finally he was nailed to a tree, and then beheaded. The priest Hermolaus and the brothers Hermippos and Hermocrates suffered death with him, in the year 308.

LESSON​
Happy are they who, whatever may be their station or calling in life, are intent on bringing those with whom they come into contact under the influence of religion. But, alas, too many do just the reverse. They permit themselves to be led astray by bad example, and set aside the claims of the Church as too severe and exacting. How do you act in this regard? Do you shun the company of the wicked? A proverb says: "Tell me in whose company you are found, and I will tell you who you are." Bad company insensibly undermines faith and morals, overcomes the fear of evil and the aversion to it and weakens the will. "He that loveth danger shall perish in it" (Ecclus. iii. 27).

As soon as St. Pantaleon came to a sense of his apostasy, he repented and returned to the practice of the Faith. He did this despite the knowledge that he thereby incurred hatred and persecution. The true Christian will ever follow the dictates of conscience and please God, whether he thereby incur the displeasure of men or not. If, to please men, we become remiss in the service of God, we show that we fear and love Him less than men. What a lamentable folly! Of whom have we to expect greater benefits or to fear greater evils--from God or man? Do not act thus unwisely; rather imitate St. Pantaleon, and live for God and His service.

Prayer of the Church

Almighty God, grant us through the intercession of Thy blessed martyr Pantaleon to be delivered and preserved from all ills of the body, and from evil thoughts and influences in spirit. Through Christ our Lord. Amen.
Click to expand...