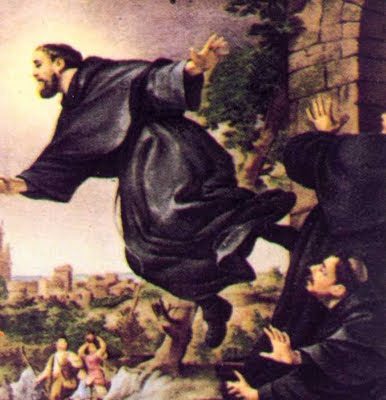 JOSEPH DESA was born the 17th of June, 1603, at Cupertino, a small village of the diocess of Nardo, between Brindisi and Otranto, six miles from the coast of the gulf of Tarento. His parents were poor, but virtuous. His mother brought him up in great sentiments of piety; but treated him with great severity, punishing him frequently for the least fault, to inure him to an austere and penitential life. From his infancy he gave signs of an extraordinary fervour, and every thing in him seemed to announce that he already tasted the sweets of heavenly consolations. He was very attentive to the divine service, and in an age when the love of pleasure is generally predominant, he wore a hair shirt, and mortified his body by divers austerities. He was bound apprentice to a shoemaker, which trade he applied himself to for some time.

When he was seventeen years of age he presented himself to be received amongst the Conventual Franciscans, where he had two uncles of distinction in the Order. He was, nevertheless, refused because he had not made his studies. All he could obtain was to be received amongst the Capuchins in quality of lay-brother; but after eight months he was dismissed as unequal to the duties of the Order. Far from being discouraged he persisted in his resolution of embracing a religious state. At length the Franciscans, moved with compassion, received him into their convent of Grotella, thus called from a subterraneous chapel dedicated to God under the invocation of the Blessed Virgin. This convent was situated near Cupertino. The saint having finished his novitiate with great fervour, he made his vows, and was received as lay-brother amongst the Oblates of the Third Order. Though employed in the meanest offices of the house, he performed them with the most perfect fidelity. He redoubled his fasts and austerities; he prayed continually, and slept only three hours every night. His humility, his sweetness, his love of mortification and penance, gained him so much veneration, that, in a provincial chapter held at Altamura in 1625, it was resolved he should be admitted amongst the Religious of the Choir, that he might thus qualify himself for holy orders.

Joseph begged to go through a second novitiate, after which he separated himself more than ever from the company of men, to unite himself more closely to God by prayer and contemplation. He looked upon himself as a great sinner, and imagined it was through mere charity that the religious habit was given him. His patience made him bear in silence and with joy the severest rebukes for faults which he had not committed; and his obedience was such that he executed without delay the most difficult duties enjoined him. So many virtues rendered him the object of universal admiration. Being ordained priest in 1628, he celebrated his first mass with inexpressible sentiments of faith, of love, and respect. He chose a retired cell that was dark and incommodious. He would often go to pray to the most unfrequented oratories, that he might give himself up more freely to contemplation. He divested himself of every thing that was allowed him by his rule; and when he saw himself thus naked, he cried out, prostrate before his crucifix: “Behold me, O Lord, bereft of all earthly things: be thou, I beseech thee, my only good; I look upon every other thing as a real danger and as a loss to my soul.” 1

The inquisitors sent him to Rome to his general, who received him with harshness, and ordered him to retire to the convent of Assisium. Joseph was filled with joy at this news, on account of the great devotion he had to the holy founder of his Order. The guardian of Assisium treated him also with roughness; but his sanctity shone forth more and more, and persons of the highest distinction expressed an ardent desire to see him. He arrived at Assisium in 1639, and remained there thirteen years. At first he suffered many trials both interior and exterior. His superior often called him hypocrite, and treated him with great rigour. On the other hand, God seemed to have abandoned him; his religious exercises were accompanied with a spiritual dryness that afflicted him exceedingly; the impure phantoms which his imagination represented to him, joined to the most terrible temptations, cast him into so deep a melancholy, that he scarcely dare lift up his eyes. His general being informed of his situation, called him to Rome, and having kept him there three weeks, he sent him back to his convent of Assisium. 5

The saint, on his way to Rome, experienced a return of those heavenly consolations which had been withdrawn from him. At the name of God, of Jesus, or of Mary, he was, as it were, out of himself. He would often cry out: “Vouchsafe, O my God, to fill and possess all my heart. O that my soul was freed from the chains of the body, and united to Jesus Christ! Jesus, Jesus, draw me to yourself; I am not able to live any longer on the earth.” He was often heard to excite others to the love of God, and to say to them: “Love God; he in whom this love reigns, is rich although he does not perceive it.” His raptures were as frequent as extraordinary. He had many, even in public, to which a great number of persons of the first quality were eye-witnesses, and the truth of which they afterwards declared upon oath. Among those, John Frederick, duke of Brunswick and Hanover, was one. This prince, who was a Lutheran, was so struck with what he had seen, that he abjured his former tenets, and embraced the Catholic faith. Joseph had also a singular talent for converting the most obdurate sinners, and quieting the minds of such as laboured under any trouble. He used to say to some scrupulous persons who came to consult him: “I neither like scruples nor melancholy; let your intention be right, and fear not.” He explained the most profound mysteries of our faith with the greatest clearness; and this sublime knowledge he owed to the intimate communication he had with God in prayer. 6

His prudence, which was remarkable in the conduct of souls, drew to him a great concourse of people, and even of cardinals and princes. He foretold to John Casimir, son of Sigismund III., king of Poland, that he would one day reign for the good of the people, and the sanctification of souls, and advised him not to engage in any religious Order; but this prince having afterwards entered among the Jesuits, took the vows of the scholars of the society, and was made cardinal by Pope Innocent X in 1646. Joseph dissuaded him from the resolution he had taken of receiving holy orders. What the saint foretold came to pass; for Uladislas, eldest son of Sigismund, dying in 1648, John Casimir was elected king of Poland; but after some time resigned his crown and retired into France, where he died in 1672. It was this prince who himself afterwards disclosed all the circumstances of the fact which we have here related. 7

His miracles were not less remarkable than the other extraordinary favours he received from God. Many sick owed their recovery to his prayers. The saint falling sick of a fever at Osimo, the 10th of August, 1663, foretold that his last hour was near at hand. The day before his death he received the holy viaticum, and after it the extreme unction. He was heard often to repeat those aspirations of a heart inflamed with the love of God: “Oh! that my soul was freed from the shackles of my body, to be reunited to Jesus Christ! Praise and thanksgiving be to God! The will of God be done. Jesus crucified, receive my heart, and kindle in it the fire of your holy love.” He died the 18th of September, 1663, at the age of sixty years and three months. His body was exposed in the church, and the whole town came to visit it with respect; he was afterwards buried in the chapel of the Conception. The heroism of his virtues being proved, and the truth of his miracles attested, he was beatified by Benedict XIV. in 1753, and canonized by Clement XIII. in 1767. Clement XIV. inserted his office in the Roman Breviary. See the Life of St. Joseph of Cupertino, written in Italian, by Count Dominic Bernini in 1722, and dedicated to Innocent XIII. Agelli has given an abridgment of it in 1753, with an account of twenty-two new miracles. We have another abridgment of the life of this saint by Pastrovicchi, also in 1753. See also F. Suysken, Comment. et Not. p. 992. 8

At that time: Jesus spake unto the chief priests and Pharisees by parables, and said: The kingdom of heaven is like unto a certain king, which made a marriage for his son. And so on, and that which followeth.
Click to expand...

A Homily by St. Gregory the Pope

Dearly beloved brethren, ye have already entered, at the Lord's bidding, into the house where the marriage feast is being held, that is to say, into the Holy Church, and look ye well to it, that when the King cometh in to see the guests, he see nothing amiss in your soul's wedding garment. For indeed it is with great searchings of heart that we are behoven to consider that which so soon cometh. And when the King came in to see the guests, he saw there a man which had not on a wedding garment. Dearly beloved brethren, what are we to think is signified by this wedding garment? Is it baptism? or is it faith? But without baptism and faith, who could be seated at the marriage feast? He that believeth not would still be without the house. What then, except love, must we understand by the wedding garment? He who hath faith and is in the Holy Church, but hath not charity, cometh in unto the wedding indeed, but hath not a wedding garment. And charity is well called the wedding garment, for it is the garment wherewithal our Maker decked himself when he came to wed the Church unto himself.

It was the work of God's love alone that his Only-begotten Son should wed himself unto the souls of the elect. Whence indeed John saith: God so loved the world, that he gave his Only-begotten Son, that whosoever believeth in him should not perish, but have everlasting life. He therefore whom love brought among men, sheweth that the same love is his wedding garment. Each one therefore of you who is in the Church and believeth in God, hath already come in unto the marriage-feast, but if he keep not the grace of charity, he is come in thither not having a wedding garment. In sooth, my brethren, if one be asked to an earthly marriage, he changeth his attire, to shew even by his garments that he rejoiceth in the joy of the Bride and Bridegroom, and he would be ashamed to appear in unseemly raiment among the guests that are feasting and making merry. We are come unto God's marriage feast, and we make pretence to change the vesture of our hearts. There is joy among the angels when the elect are taken to heaven. With what face shall we look upon this spiritual feast if we come in thither not having charity, the only wedding garment wherein we can appear comely?