St. Januarius and his Companions 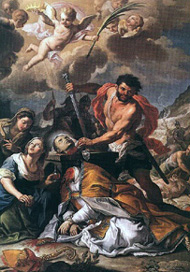 St. Januarius and his Companions
by Fr. Francis Xavier Weninger, 1882​
The holy bishop, St. Januarius, was a native of Benevento, a city in the Neapolitan territory. His parents, not less virtuous than of high lineage, gave him from his earliest youth, a most pious education, and he was so earnest in his endeavors to lead a blameless life, that the clergy and laity, after the death of their bishop, desired no other successor than Januarius. He alone opposed the election and could not be persuaded to consent, until obedience to the command of the Pope forced him to yield. Great as had been the struggle it had cost the holy man to accept the high dignity conferred upon him, he was equally zealous and untiring in discharging his duties when installed into his see. At that period, the tyrants Dioclesian and Maximian raged against the Faithful, endeavoring to destroy all Christendom. The holy bishop, therefore, used all his powers to strengthen his flock in the true faith and to encourage them to allow neither torments nor death to make them forsake their God.

The teachings the holy bishop gave to others he exemplified in his own life, thus showing to his flock how to endure martyrdom. Timotheus, the Governor of Campania, received orders to force the Christians to worship the gods, or, not succeeding in this, to execute them. He resolved to begin with St. Januarius, whose zeal for the Christian faith was everywhere known. Hence the Saint was taken prisoner and presented, at Nola, to the Governor, who, making him acquainted with the imperial mandate, commanded him to obey it. Januarius, however, assured him that he would much rather die than be faithless to the true God, and by worshipping idols, become a servant of Satan. Hardly had he made this declaration, when Timotheus ordered him to be cast into a burning furnace. But it pleased the Almighty to renew the miracle which He had formerly wrought on the three youths in the furnace of Babylon. Januarius remained unharmed, and praised the only true God of heaven and earth. When the tyrant saw that not even a hair on the head of the bishop was burned, he foamed with rage, and had him stretched upon the rack, and his limbs so cruelly torn, that afterwards the holy martyr could not move one of them. Dragging him to prison they thought he would expire.

The Almighty, however, to spare him for still greater tortures, gave him, after a short prayer, the full use of his limbs, to the great astonishment of the tyrant. As the latter had to set out for Puteoli, the holy bishop had to run like a horse before his chariot and was most shamefully treated by the servants. To the same indignity two deacons were condemned who had visited him in his prison. At Puteoli, all three were cast into a dungeon, where they found two other deacons and two laymen, to whom it had already been announced that they should be given to wild beasts. The same sentence was passed upon the holy bishop and his two companions. Hence, they were all seven brought into the amphitheatre, and the wild beasts let loose upon them. The omnipotence of God, who had taken from the fire the power to burn, now also took from the wild beasts the instinct to devour. They looked at the confessors of Christ, and without in the least harming them, lay down at their feet.

Timotheus ascribed this, after the manner of the pagans, to witchcraft, and unwilling to be conquered, he commanded them to be beheaded. No sooner had he given the order, than God punished him with blindness. Januarius taking pity on him, after a short prayer, restored his sight. Awed by this, as well as by the foregoing miracles, a great many of the spectators were converted to Christ. The godless Governor alone remained insensible, and fearing the displeasure of the emperor, he dared not countermand his order but had the Saint and his companions beheaded.

The body of the Saint was first brought to Benevento, but later to Naples, where it is held in great veneration on account of the protection, which, by the intercession of St. Januarius, the city enjoys from the eruptions of Mount.Vesuvius. It has happened several times that when the relics of the Saint were carried in solemn procession, towards the burning waves of lava which was ejected by this mountain and came rolling onwards to destroy the city, the eruption ceased and Naples was saved. To this day, the blood of the Saint is preserved at Naples, in a glass vial. The blood is congealed; but when placed near the head of the Saint, it melts and bubbles up. This miracle, which has continued until the present time, has been witnessed by many, both Catholics and non-Catholics, and although several of the latter have ascribed it to deceit, it is impossible for them to prove their assertion.

To the life of St. Januarius, we will add that of St. Cyprian, who was also bishop and martyr, and whose name is recorded, on the 16th of this month, in the Roman Martyrology.

This man, whom St. Jerome describes as a model of eloquence and holiness, was born at Carthage, in Africa, of noble but pagan parents. Growing up, he excelled to such a degree in the art of eloquence, that he was chosen to teach rhetoric. He became acquainted with Cascilius, a pious priest, who, convincing him of his errors, brought him happily into the pale of the Catholic Church. At holy baptism, he took the name Cascilius in grateful memory of him who had instructed him in the doctrines of the true faith. The heathens could not comprehend so unexpected a conversion of their excellent orator, and were greatly provoked, while the Christians rejoiced and praised the Lord.

Cyprian led so pious and holy a life after he had been baptized, that the bishop of Carthage ordained him priest. On the death of this bishop, Cyprian was elected to succeed him, but deeming himself unworthy of so high a position, he fled and endeavored to conceal himself; but being discovered and placed, almost by force, on the episcopal chair, he submitted to the divine will, and entered on his new functions. He was a most watchful shepherd to his flock, a tender father to the poor and afflicted, an invincible protector of the true faith and not only an incomparable teacher, but a perfect model of all virtues.

Some time later, in the reign of the emperor Decius, arose a terrible persecution of the Christians, which the Almighty permitted in order to renew their fervor. The Clergy of Carthage, who knew that the idolaters would first seize their bishop, advised him to leave the city, and live for some time concealed in a quiet place. The holy man at first refused to follow their advice, lest he might have the appearance of not having sufficient courage to make a public confession of his faith, or to suffer for the sake of Christ. But when he had asked counsel of God in prayer, he acted in accordance with the request of the clergy, and concealed himself outside of the city, but in a place known to the Christians. During the persecution, which lasted forty-five months, he encouraged the faithful, as well personally as also by the priests whom he had with him and whom he frequently sent into the city. He strengthened the weak and despairing, and endeavored to bring back into the pale of the Church, those who for fear of torments had apostatized.

He returned to Carthage when the persecution ceased, and labored, with his unwearied zeal, to repair the great damage his beloved flock had suffered. Not long after, the barbarians invaded the land, and besides occasioning other sufferings, they took a great many Christians away as prisoners. The holy bishop gave all he possessed for their ransom, and gathered, for the same purpose, a large sum of money in his diocese. Hardly had this storm passed over, when a terrible pestilence commenced in Africa, making great havoc among the inhabitants of Carthage. The Saint left nothing undone to assist those stricken down with the dreadful disease. He visited them, administered the Holy Sacraments to them, provided them with remedies and food, and animated those who were well to follow his example, and be kind to the sick, although a great portion of the sufferers were pagans, who had proved themselves always the most bitter enemies of the Christians.

This scourge left, only to give place to another; for no sooner had God restored health to the people of Carthage, than a fresh persecution of the Christians broke out under the Emperor Valerian. Aspasius, the Roman Governor at Carthage, knew that Cyprian was the principal support of Christianity at that place, but fearing to cause a revolt, dared not seize and execute him. He therefore commanded him to leave the city, and banished him to Curubis. The holy man obeyed, but succeeded in making such arrangements, that several priests remained to strengthen and encourage the Christians in their faith. He himself wrote several letters to them from the place of his exile, in which he exhorted them to remain true to their God. When, after the expiration of a year, a new Governor came to Carthage, Cyprian left Curubis, and made his residence near the city in a garden which he had bought for the poor. He remained there almost a year, and as the crowd of Christians that visited him increased daily, one of the enemies of the faithful informed the Governor of it. The holy bishop was exhorted to avoid the approaching danger by flight; but he answered that his martyrdom had been revealed to him by the Almighty. He desired nothing more of this world but to end his life in the presence of his flock and to give them an example how to remain constant in their faith.

The desire of the holy bishop was granted. He was taken prisoner and brought before the Governor, whose first question was: "Are you Cyprian ?" "Yes," answered the Saint; "I am Cyprian, Bishop of Carthage!" Upon this, a written order of the Emperor was put into his hands, either to sacrifice to the gods, or to give up his life. Cyprian having read the order with unmoved heart, replied: "I will rather give my life a thousand times than sacrifice to the gods;" on which the Governor sentenced him to die by the sword, as a scorner of the imperial order. Having listened calmly to his death-sentence, the holy bishop said cheerfully: "Thanks be to God." He was followed to the place of execution by a great crowd of people, to whom he gave the most fervent exhortations not to forsake the Lord. Arrived at the place where he was to receive his death, he divested himself of his episcopal robe and handed it to a deacon, and ordered that the executioner should be paid twenty-five pieces of gold, to reward him for the stroke which should promote him to the Kingdom of heaven. He then knelt down, raised his eyes to heaven, and, with invincible fortitude, received the fatal stroke, in the year of our Lord 260. Thus ended the glorious career of this holy bishop, to whom St. Augustine, St. Jerome, St. Gregory Nazianzen, and other fathers of the Church, give the highest praise on account of his great virtues and heavenly wisdom.