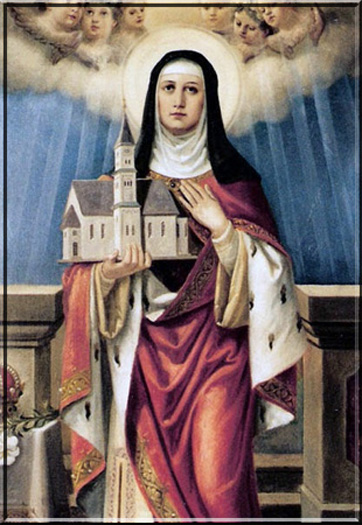 St. Hedwig, Widow
(by Father Francis Xavier Weninger, 1876)​
An example of all virtues, especially worthy to be imitated, is presented to us today, in the life of St. Hedwig. Her father was Berthold, Duke of Carinthia and Count of Meran. Her mother, Agnes, was of equally high birth. Already in Hedwig's childhood it was visible that God had gifted her with a mind far beyond her age. She possessed an innate inclination to all virtues, and nothing of what usually delights the young touched her heart. Just as little pleasure did she evince, in later years, in the honors, riches and amusements of the world. Reading and praying were her only enjoyments. All her books were devout works, and her prayers were said mostly before an image of the Blessed Virgin, whom she loved and honored like a mother. When scarcely twelve years old, she was given in marriage to Henry, Duke of Poland and Silesia. Although married so early in life, her conduct was so sensible and virtuous that every one was greatly astonished at it. Among her maxims was this: "The greater one is by birth, the greater one must be in virtue, and the more distinguished we are in station, the more we must distinguish ourselves by our conduct, in order to be a bright example to others." She became the mother of three sons and three daughters, all of whom she educated most piously.

She was a little over twenty, and her husband thirty years of age, when their sixth child was born; after which, desiring to serve God more perfectly, she made a vow before the bishop, in which her husband joined, to live in future in perpetual continence. From that hour, St. Hedwig grew daily more and more perfect in all Christian virtues, occupying every moment left her from the cares she bestowed upon her children, in prayers and deeds of charity. She found especial comfort in assisting at Holy Mass; hence, she was not satisfied with one, but went to as many as she could; and the manner in which she conducted herself in church was a proof of her deep devotion. Towards widows and orphans, her kindness was truly motherly, and many of them she fed in her palace, serving them herself, sometimes on bended knees. She frequently visited the sick in the hospitals; encouraged them to be patient, and assisted them by rich alms. She never hesitated to wash the feet of the lepers, or to kiss the sores of the sufferers. She persuaded the Duke, her husband, to build a large convent not far from Breslau, for the Cistercian nuns, which she made a home for poor children, who were educated there, and afterwards provided for according to their station. Nothing could be more modest and plain than the garments of the holy Duchess, and her example in this respect induced others living at court to attire themselves with great simplicity. In the midst of the dissipation of the court, the Saint lived so austere a life, that it was more to be admired than to be followed.

To prove her virtue, God visited her with a great many cares and sorrows. The enemy invaded the dominions of her spouse, who was wounded in a battle and made prisoner. When this news was brought to her, she raised her eyes confidently to heaven, saying: "I hope to see him again soon, well and free." She herself went to Conrad, the Duke who had made her husband prisoner, and spoke so earnestly to him that he restored her husband to liberty. Soon after, Henry became dangerously sick, and Hedwig nursing him most faithfully, did everything to make his death happy. To those who pitied her after his death, she said: "We must adore the decrees of the Almighty, not only in days of happiness, but also in those of sorrow and bereavement." Three years later, she lost her first-born son, who was killed in a battle with the Tartars; and this sad event found her as submissive to the will of Providence as she had been on the death of her husband.

Soon after the burial of the Duke, the Saint had gone into the convent, which, at her request, he had founded, to be further removed from all temporal vanity, and to serve the Lord more peacefully and perfectly. She observed most strictly the regulations of the Order, desiring to do the meanest work and to be considered the least of the Sisters. In her austerity to herself she had now full liberty to satisfy herself. She fasted daily, except on Sundays and festivals; but her fasts were much more rigorous than those of others; for she abstained from all meat and wine, and partook only of herbs, bread and water. She wore, day and night, rough hair-cloth and an iron girdle which she had already worn while at court. She went bare-footed over snow and ice, and slept, when well, on the bare boards, and when sick, on straw covered with a coarse cloth. Her sleep lasted hardly three hours before Matins; the remainder of the night she occupied in prayer, which she only interrupted to scourge herself to blood. So severe a life emaciated her body to a skeleton. While working, she always raised her soul to the Most High by mental prayer, and she was often found in an ecstasy, or raised high above the ground. Her conversation was only of God, virtue and piety. Towards the crucified Saviour, she bore the deepest devotion, and the mysteries of His bitter passion and death were the objects of her daily meditations, during which she frequently shed tears. Mary, the Blessed Virgin, was most ardently loved by her, and her whole countenance glowed at the bare mention of her name.

So holy a life could only be followed by a happy death, of which a severe sickness was the messenger. Before others became aware that her life was in danger, the Saint asked for the last Sacraments, and she received them with a devotion which drew tears from the eyes of all who were present. Before her end, St. Catherine, St. Thecla, St. Ursula, and St. Magdalen appeared to her, all of whom she had greatly honored during her life. These heavenly visitors comforted her and accompanied her to the mansions of everlasting bliss. Twenty-five years after her death, her holy body was exhumed, as so many extraordinary miracles had taken place. On opening the coffin, the whole church was filled with fragrance. The flesh of the whole body was consumed, except that of three fingers on her left hand. With these she had frequently held a picture of the Blessed Virgin, which she constantly carried with her. While dying, she held this picture so fast, that after her death it could not be removed, and it was buried with her. Pope Clement IV. placed the Duchess among the Saints on account of her many great virtues, of the miracles which she had wrought while she lived, and of those which took place after her death, through her intercession. The inhabitants of Poland venerate her as one of their special Patrons.

At that time: Jesus spake this parable unto his disciples: The kingdom of heaven is like unto treasure hid in a field. And so on, and that which followeth. Matthew : 13, 44-52
Click to expand...

A Homily by St. Gregory the Pope

Dearly beloved brethren, the kingdom of heaven is likened unto earthly things, that the mind may, from what it knoweth well, come to contemplate what it knoweth not. Thus by the example of things which are seen, it may rise to things unseen, and be warmed, as it were, by the touch of those common things which it is accustomed to use, and so from things known and loved, may learn to love also the things hitherto unknown and unloved. For the kingdom of heaven is likened unto treasure hid in a field, the which when a man hath found, he hideth, and for joy thereof, goeth and selleth all that he hath, and buyeth that field.

And herein we must remark that the treasure, when once it hath been found, is hidden to keep it safe. He whose intimate yearnings after God are not hidden from the praise of men, is open thereby to the attacks of evil spirits. In this life we are, as it were, journeying homewards on a road beset by evil spirits who are like highwaymen. He therefore inviteth robbery who carrieth his treasure ostentatiously. Doubtless our neighbour should be able to see our good works, as it is written: Let your light so shine before men that they may see your good works, and glorify your Father which is in heaven. But this is not to be understood to mean that we are to seek the praise of men by what we do. Rather, let us in such wise work in the open that the inner intention of devotion is not advertised. So we shall give an example to our neighbour, and yet keep hidden, except from the sight of God, our purpose of pleasing him.

The treasure is the desire for heaven. The field in which it is hidden is the earnestness of spirit wherein this desire is planted and cultivated. Which field is bought and paid for at the price of selling that a man hath, to wit, by renouncing the pleasures of the flesh and putting all earthly lusts under the feet of discipline, so that he smileth back no more when the flesh smileth at him, and is dismayed no more at anything that can only kill the body. Whosoever doeth thus, hath already sold all that he had, and bought that field.