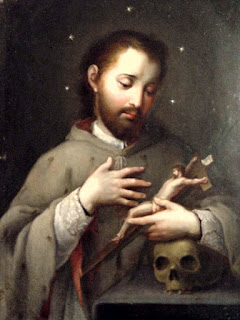 St. Gerard Majella​
St. Gerard Majella is the patron saint of expectant mothers. During this month when churches in the U.S. draw special attention to the sanctity of every life, we ask for St. Gerard's intercession for all mothers — those expecting a child, those praying to conceive, those who mourn the loss of a child, however that separation may have happened.

St. Gerard Majella was born in Muro Lucano, Italy, on April 6, 1726, into a family of humble circumstances. In April 1749 after attending a Redemptorist mission in Muro, Gerard succeeded in getting himself accepted by the congregation. Following a trial period and a year of novitiate in the house at Deliceto, he professed religious vows on July 16, 1752.

Gerard was noted for his observance of the Redemptorist rule, and collecting money for the material needs of the community. Gerard had great empathy and testified to trust in the love and the compassion of God.

During his five years as a lay brother in the congregation, Gerard was remarkable for his apostolic zeal, patience in sickness, love for the poor, deep humility in the face of false accusation, heroic obedience, spirit of penance and constancy in prayer. He wrote numerous letters of spiritual direction. The Lord favored him with many spiritual gifts, including prophecy, the reading of people's hearts, and the gifts of miracles. He died at Materdomini on October 16, 1755.

Gerard once left one of his handkerchiefs behind after a visit to a woman in the village where he lived. When she tried to return it to him, Gerard told her to keep it; she would have need of it in the future. Later, when the woman was in the middle of a difficult childbirth and near death, she asked for Gerard's handkerchief to be brought and placed over her womb. The difficulties passed and the woman gave birth to a healthy child. Since then, St. Gerard has been invoked as a patron of expectant mothers.
Last edited: Oct 16, 2019