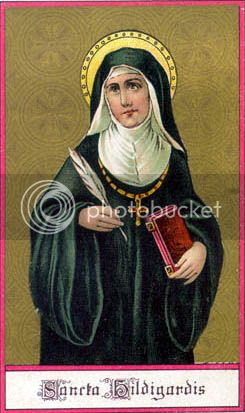 O greening branch!
You stand in your nobility
Like the rising dawn.
Rejoice now and exult
And deign to free the fools we are.
From our long slavery to evil
And hold out your hand
To raise us up.

Spirited light! on the edge
of the Presence your yearning
burns in the secret darkness,
O angels, insatiably
into God’s gaze.

Perversity
could not touch your beauty;
you are essential joy.​ 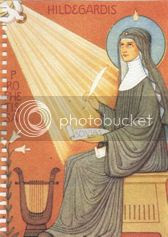 But your lost companion,
angel of the crooked
wings – he sought the summit,
shot down the depths of God
and plummeted past Adam –
that a mud – bound
spirit might soar.

You, all-accomplishing
Word of the Father
are the light of primordial
daybreak over the spheres.

You, the foreknowing
mind of divinity,
foresaw all your works
as you willed them,
your prescience hidden
in the heart of your power,
your power like a wheel
​ 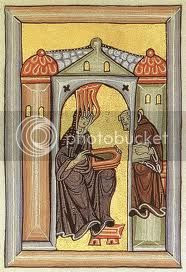 A round the world,
whose circling never began
and never slides to an end.
No creature has meaning
without the Word of God.

God's Word is in all creation,
Visible and invisible.
The Word is living Being, Spirit,
all verdant greening,
all creativity.

This Word flashes
out in every creature.
This is how the Spirit
is in the flesh~~
the Word is
indivisible from God
Poem by Saint Hildegarde​ 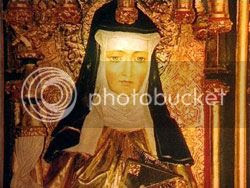 ​
Today, September 17, we celebrate the feast day of Saint Hildegarde von Bingen (1098-1179), mystic, anchorite, and Benedictine abbotess. Saint Hildegarde was a preacher at a time when women were forbidden to preach, a named composer when most music was anonymous, a visionary, a theologian, a writer, an artist, a hagiographer, a prolific letter-writer and an early scientist, botanist, herbalist, physician and healer. She even invented her own coded language. Saint Hildegarde accomplished these things through a mystic connection to the Lord, especially impressive given that she lived her youth and half of her adulthood enclosed in her cell, with her only contact to the outside world through a tiny window! When few women were respected, she was consulted by and advised bishops, popes, and kings. She founded a vibrant convent, where her musical plays were performed. 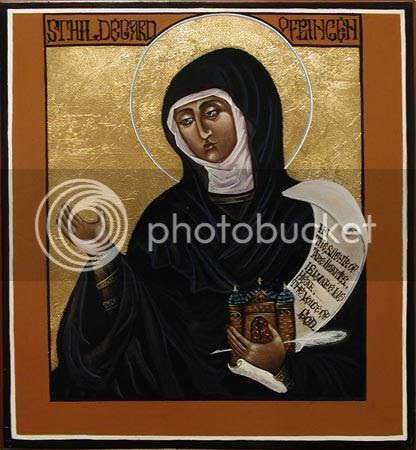 ​
The life of Hildegarde as child, was an extraordinary one. The tenth child born to her aristocratic parents in Bockelheim, Germany, she demonstrated visionary gifts and abilities from an early age, although mostly kept these to herself. Left much to herself on account of her ill health, she led an interior life, trying to make use of everything for her own sanctification. She wrote of herself:

"Up to my fifteenth year I saw much, and related some of the things seen to others, who would inquire with astonishment, whence such things might come. I also wondered and during my sickness I asked one of my nurses whether she also saw similar things. When she answered no, a great fear befell me. Frequently, in my conversation, I would relate future things, which I saw as if present, but, noting the amazement of my listeners, I became more reticent."

​
At age eight, Hildegarde’s parents gave her, as a tithe, to the Church, dedicating her completely to the service of God. She was sent to live with an anchoress, Jutta of Sponheim, in a small cottage next to the monastery of Saint Disibod. There, she received a basic religious education, although she never overcame her feelings of inadequacy for not having received formal education. While she became fluent in Latin, she required the assistance of secretaries later in life to record her visions and writing. However, Hildegarde demonstrated an intuitive grasp of languages, creating her own, and writing complex and challenging statements which captured the mysticism and depth of the contemplative faith.

As a young anchoress herself, Hildegarde could hear the Benedictine Masses being celebrated at the nearby monastery, and she began composing her own music to praise and contemplate the Lord. Her compositions, ethereal and somewhat mournful, are receiving a resurgence of interest today. 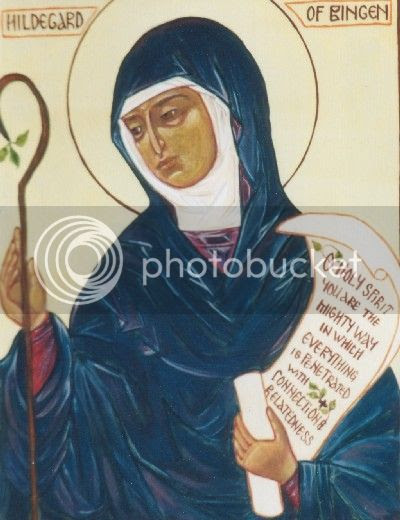 ​
Hildegarde lived in seclusion until the age of 38 when her spiritual director, Jutta, died. At that time, she was elected the superior of a religious community which had developed around her anchorage. A convent was constructed, and Hildegarde—who prior to the construction had offered advice and direction to those who sought her through letters and the tiny window in her cell—was free to interact more directly with her charges. 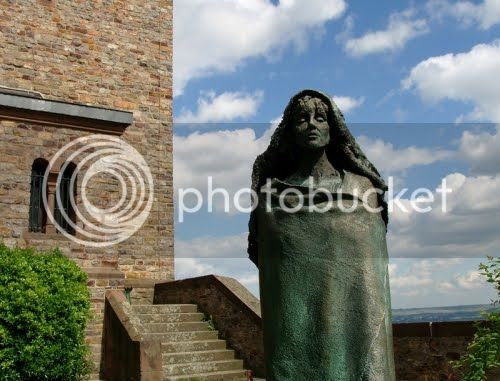 ​
During the years with Jutta, Hildegarde confided of her visions only to Jutta and a monk named Volmar, who was to become her lifelong secretary. Hildegarde had experienced visions from her early childhood, and reported to Jutta and Volmar that she could see things that were invisible to those around her, foretold the future, and her vision was filled with a strange luminosity which she later came to call 'the reflection of the Living Light'.

Upon becoming superior of the new order, Hildegarde became convinced she should no longer remain silent about what she experienced in the Living Light. She heard a mystic voice that addressed her:
"0 frail human formed from the dust of the earth, ashes from ashes,cry out and proclaim the beginning of undefiled salvation! Let those who see the inner meaning of Scripture, yet do not wish to proclaim or preach it, take instruction, for they are lukewarm and sluggish.... Therefore pour out a fountain of abundance, over-flow with mysterious learning, so that those who want you to be despicable on account of Eve's transgression may be overwhelmed by the flood of your profusion." 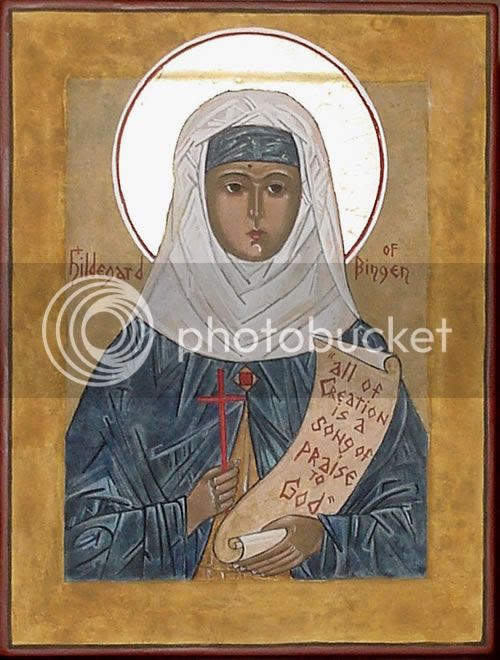 ​
She was further gifted, several years later, with a vision of God which gave Hildegarde instant understanding of the meaning of religious texts. He commanded her to write down everything she would observe in her visions, which she did with the aid of Volmar.

"And it came to pass…when I was 42 years and 7 months old, that the heavens were opened and a blinding light of exceptional brilliance flowed through my entire brain. And so it kindled my whole heart and breast like a flame, not burning but warming…and suddenly I understood of the meaning of expositions of the books…"

Yet, Hildegarde was frequently ill, experienced horrible migraines and auras, and was frequently incapacitated by the power of her visions.She was also overwhelmed by feelings of inadequacy and hesitated to act upon the instructions she received from the Lord at times:

"But although I heard and saw these things, because of doubt and low opinion of myself and because of diverse sayings of men, I refused for a long time a call to write, not out of stubbornness but out of humility, until weighed down by a scourge of god, I fell onto a bed of sickness." ​
Saint Hildegarde never doubted that her visions came from the Lord, bought sought papal approval. Eventually she received this, following the publication of her first visionary work, and her fame spread throughout Germany (and then beyond). Hildegarde went on to write prolifically, on many subjects, including: commentaries on the Gospels, the Athanasian Creed, and the Rule of St. Benedict, as well as Lives of the Saints and a medical work on the well-being of the body. Based upon her writings, artwork, musical composition, and poetry, she is regarded as one of the greatest figures of the 12th century-- the first of the great German mystics (as well as poet, physician, moralist, and prophet). She has been compared to Dante and to William Blake. 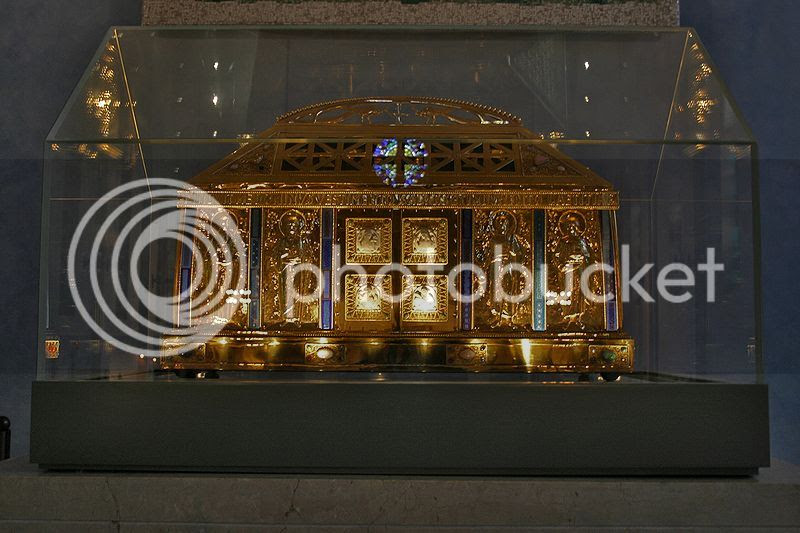 Reliquary of Saint Hildegarde
​
Saint Hildegarde died at the age of 81, with numerous miracles reported at her death, and many more later reported at her grave. She was proclaimed as a Saint by the multitudes. She has long been venerated as a saint but has never been formally canonized. But miracles at her grave and her presence in the Roman Martyrology attest to her holiness and the validity of her visions. Of them Hildegarde said, “These visions which I saw I beheld neither in sleep nor dreaming nor in madness nor with my bodily eyes or ears, nor in hidden places; but I saw them in full view and according to God’s will, when I was wakeful and alert, with the eyes of the spirit and the inward ears.”

O God, by whose grace your servant Hildegarde, kindled with the Fire of your love, became a burning and shining light in your Church: Grant that we also may be aflame with the spirit of love and discipline, and walk before you as children of light; through Jesus Christ our Lord, who lives and reigns with you, in the unity of the Holy Spirit, one God, now and for ever. Amen.